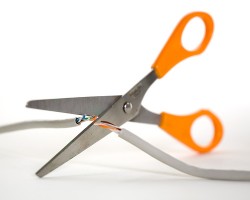 Aside from obvious things, like decreasing the number of external links and their quality, removing links from social services and so on, we found that some things don’t quite work as expected. For example – removing pretty and fat links from other web sites don’t send the web site back to the position it held before. So for example, let’s say your web site was number 16 (or 6th on a second page). You’ve added a bunch of links from good web sites with some PR juice and your site jumped to be number 12. Now, if you kill every single link that you have added the web site will sink to (approximately) 14 – 15th position, staying one or two steps higher then before.

Not sure why is this happening, but it does. I’ll give it some time to see if it will sink deeper, but it looks like if you purchase links a little before Google’s PR update and remove them a little after – it may do the same trick as if you were paying for them all the time. All you need is just a sharp date of the next Google dance.

Last night I’ve got mail. One of the letters was from a collection agency – they wanted to collect $21.30 on behalf of Verizon phone company. Turns out – I owe these monies to Verizon as a “final bill” – some last minute money extortion policy that they enforce. Apparently, someone at the billing department forgot to send me that one “final bill” in February, when I switched off my land line.

First problem is that you have to answer every single question in loud clear voice. In almost any environment, except your sound-proof basement there will be a background noise. Sometimes the noise is so significant that system doesn’t recognize a word from what you’re saying. Sometimes you are in a public area or at the office, or in lunch room. Oh, and SPEAKING OUT LOUD YOUR ACCOUNT NUMBER, LAST 4 NUMBERS OF YOUR SOCIAL SECURITY AND FULL CREDIT CARD NUMBER WITH EXPIRATION DATE IS A WRONG AND STUPID IDEA! Hello, do you hear me now?!

I had to hang up and try again. After several attempts I got through to the live person and was told that “there is no person here, at Verizon, who would take your payment over the phone“. Everything has to be done via automated system that I already have been through. The evil, vicious circle was now complete.

My guess is that somehow I will be able to figure out how to get those money to Verizon. Worse case scenario – I’ll go through the collection agency that sent me the bill. What I see is that Verizon, apparently, cutting every possible cost on land line phone business. Obviously, billing department has to have much more thorough training than people who answer the phones first. I expect the service fully fold to total uselessness in about a year or so. Given the rate with which people turn down landlines in preference of IP-based phones and cell phones, I really think landlines would be few and scattered. The tech support would be outsourced to India where poorly trained and badly English-speaking low-wage people will make you want to go back to automated voice-recognition system. Land line is doomed!