Obviously I am not an expert on our current economy situation. However, as a small business owner I feel the pain of crisis and, as any other entrepreneur, is anxious to offer my own fix on the situation. Here it goes.

First, let me introduce a little example. For last two weeks there’s a full-size truck standing in front of the Battery Park. They sell some shoes that, supposedly, could not be found in stores. For the first week the line was long. By the end of the second week the line shortened threefold. There were couple of people in line when I checked on Friday. This morning – that’s almost third week over – there was no line at all. In fact, there was, apparently, a surplus of sales people over clients. This, if anyone missed their Economics 101, is market saturation. When you sold your product to everyone who was ready, willing and able to buy it.

Now, what happened to the mortgages is that they were sold to everyone who were ready, willing and able. Of course, the market was fluctuating, but not out of proportion. It was saturated. Then some geniuses read some marketing books and decided that they need to create a new market. This coincided with high-paying jobs being outsourced and people’s incomes going down. Or, maybe, there were no geniuses and no reading. Just someone noticed that same people who were buying houses, like the well-paid IT guys, can’t afford houses anymore, because they don’t get those big salaries, because of some starving Indian guy in poor Bangalore who claimed he could work for food and shelter.

And some real estate guy went to some mortgage specialist friend or something like that happened. And we got mortgages for the poor, when guys who make $50K a year could buy a $500K house in sunny California or in prestigious neighbourhood of Brooklyn, Manhattan or Jersey City.

This idea bombed. Obviously, there are far more guys who make $50K then those who make $250K. Even more, the average guy (or gal – it’s irrelevant to the story) who makes around $50K is much more guillible, than one who makes five times more. I know, because I’ve been there too.

So what happened next?

Demand for houses (and, therefore, mortgages) skyrocketed so high that banks didn’t know where to get so much money. So they started selling those weird papers, repackaged deals and did other smart things (see CDS, derivatives) to come up with money and profits for themselves. I am not saying it’s bad to turn a profit. I am saying that the average $50K Joe can only live off his credit cards for so long. After they’re maxed out, he has to either stop eating or move out. Hence the foreclosures became the hot topic, once more and more $50K Joes got sucked into the buying houses from same $50K Joes who got into the same whirpool a little earlier. Imagine a huge crowd, rushing and squeezing into wide open, but very narrow doors. Once the members of the crowd successfully squeezed in, the fast stream carries them into the watershed and spills them into oblivion. That’s pretty much how the system worked.

Since all these guys had problems giving back the money they’ve borrowed on one hand and demand for more credit from clients on the other hand, banks were under a continuous stress of producing more and more money so that the public can keep borrowing. That’s when it hit really hard.

Now, same guys who were fast tracked through the whirlpool and those who didn’t are splitting the bill for the fun ride. The only thing that sort of bothers me is that guys who get paid $20 million for 2 month of work (see WaMu) wouldn’t have a problem with their part of the payment. In fact – they wouldn’t even notice it.

There’s no place like home. Especially, when you have a cozy couch where you can cuddle with your loved one in front of the TV. When your loved one, who’s as far from the whole IT stuff as humanly possible, starts commenting on IT-related commercials, it only gets better.

Last night a Microsoft’s commercial popped up, one of the latest “I’m a PC and I was made into a stereotype” ones. My girlfriend somehow missed the introductory phrase, so she only caught the part where a bunch of people say “I’m a PC and this is my cubicle” pointing to couple of icebergs or “I’m a PC and I sell fish”.

The question she immediately asked me had fallen like a hammer of doom. The question was: “Is this a commercial to stop outsourcing? Have all these people lost their jobs to India and now have to sell fish or work on icebergs to feed their families?”.

Having argued that Microsoft had delivered their brand-shaping marketing message quite clearly I got puzzled. The message was, of course, delivered quite clearly. It was also obvious that my girlfriend isn’t the target market for those commercials – she’s not involved in IT-related decision making. However, it was a nice revelation to see how such people react to the imagery used in the ad. Without the online hype, without knowing all the IT stories and how Microsoft is getting back at Apple using similar-looking guy and all that buzz – how would these commercials be perceived.

Now I know. These are the commercials about IT guys who lost their jobs. I’m a PC and I sell fish. How much… ? 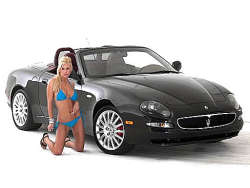 Recently I hace stumbled on a conversation that’s about as old as the marketing itself. Someone was complaining that the autoshow in their town wasn’t executed properly. One of the main complaints, among others, was that sexy girls were unfriendly, didn’t quite let visitors take pictures with them, some were even giving cold and disgusted looks to occasional photographers. Overall girls seemed to be tired and uninterested.

Some of the comments were straight to the point, but my attention drew upon definitely off-the-way remark that “you are selling cars, why do you need girls there”. Additionally, the commenter was making a point that men are not the only ones who buy hot expensive cars, women now got the money and can afford same rank of Lexuses, BMWs and Mercedeses without being somebody’s paid “associate”. So the whole idea of girls with cars is outdated and obsolete.

Personally, I am a big proponent of change. The only reasonable excuse from changing that I accept from myself is lazyness, but that’s deeply personal. However, with “cars and chicks” I tend to be on a more conservative side – keep ’em together. There’s a simple rationale behind that (sex sells) but I want it for a bunch of different reasons.

First of all – I like pretty women. The more – the merrier, so a trip to car show is like a free venture to a strip club with camera. Curves of women as well as those of cars are aesthetically pleasing (if we won’t mention the male part of my brain), so watching the show is definitely a positive emotion. Additionally, each car (as most of us, men) believe, posess a personality. By giving a new shiny car to shine next to a good looking pretty lady it has a chance to expand that personality. And it definitely improves the overall image of the brand.

It’s not like BMW or Mercedes or Aston Martin really need to establish their identity. But just think for a moment that one of the most important event in car-making industry – the car show (in NY or LA or Miami or Detroit) is done without girls. Car can’t smile, can’t walk around flowing it’s curvaceous body, can’t flash its cleavage left and right and most importantly – can’t make friends. Now there’s one more little thing to it. Think of all the guys with cameras snapping pictures of girls with cars behind them. These pictures will then be posted on blogs, Flickr, MySpace, Facebook and whatever else you can post your pictures on. A lot more people will see them. Now take that as a FREE VIRAL ADVERTISING AND PROMOTION – imagine how much that many posts, pictures and commentaries would cost if BMW would hire an advertising agency?