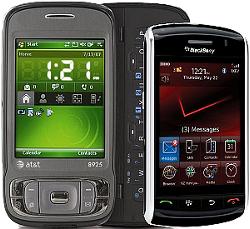 END_OF_DOCUMENT_TOKEN_TO_BE_REPLACED

Part 4 of Customizing Your Smart Phone series (part 1, part 2, part 3), final installment. This time we are going over the most complicated of the three steps I have mentioned before – installing a customized OS and software package into phone’s permanent memory.

Such packages are called ROMs, and these come in two flavors. Standard ROMs come from either a hardware manufacturer (HTC in our case) or cell phone provider (AT&T). Alternatively (and that’s where the fun begins), they are “cooked” ROMs and these come from “chefs” – those geeky types who just love to tweak their phones beyond comprehension. Cooked ROMs are, generally, created following chefs’ philosophies – that means either stuffing as much as possible into a crumpled phone’s memory or by leaving out as much as humanly possible to free up scarce phone’s resources.

That’s where the tricky part starts. Some cooked ROMs will only work with certain types/versions of radios. That means that you, essentially, have to think the whole process through even before you started (but shouldn’t you always?). Luckily, latest versions of radios generally tend to work with every modern and supported ROM out there, but doing a homework wouldn’t hurt. Once you done browsing through all the feature listings and screen shots, jot down a list of ROMs you tend to like and get going.

Install a HardSPL and the latest available radio. Then download and install each of ROMS on your list for initial testing. Most likely critical bugs will pop out fast that your list would shorten pretty quickly (I had to go through that twice because not a single ROM satisfied my needs, so I’ve got what seems to be the closest match and then went on with customizing it). Some ROMs come so overloaded that it’s almost impossible to get anything done, others quite snappy but lack important features. Once you’ve made your choice – start customizing and testing.

When testing, aside from looking at how glorious your brand new interface looks like, you should also pay attention to:

Overall process took me two evenings and a weekend, but right now I am a proud owner of the same old AT&T Tilt (a.k.a. HTC TyTN). However, the new TouchFLO interface with software lock that looks like iPhone’s “Slide to unlock” (you actually have to slide your finger to unlock the phone, but still get to use your favorite Windows Mobile OS – isn’t it cool?), updated Mobile Internet Explorer and Opera browser, clean Windows Mobile 6.1 installation with updates and fixed GPS connectivity. And plenty of memory is available to install more stuff as I need.

This is part 3 of the Customizing Your Smart Phone series (part 1, part 2). This time we will look at the most important part of customizing your phone – installing a new software for the radio in your smart phone. If you look at the specs of any phone, you will see a bunch of frequencies that phone is capable of operating on. The most universal is considered a GSM quad-band that consists of four bands of GSM/GPRS/EDGE frequencies: 850, 900, 1800 and 1900MHz. Whenever you hear a 3G moniker, or lesser known in Northern America UMTS/HSDPA/HSUPA bands they usually refer to 800/850/1900/2100 devices operating in UMTS frequency bands (data interchange bands, as opposed to voice interchange). While these numbers mean little to an unprepared mind, it’s important to understand that a connection possibility and quality of the call directly relate to which bands are supported by device and cellular service provider.

What the radio (and it’s software part) does is basically take care of how well your cell phone radio and your GPS behave when doing directly what they supposed to do. Interesting enough, certain versions of radio software behave better in certain markets, so you might want to go through a little testing. Pack an extra phone (don’t forget to charge it too) in case your updated radio version really suck. I spent about an hour per each version of radio and I only tested last three, so you shouldn’t do any worse than that.

If you have a HardSPL installed, then flashing the radio (i.e. installing a new or updated software package for your radio) should present any surprises. There’s a belief, although with little, if any, backing to it, that between radio updates it is a good idea to flash a stock radio (i.e. one that came from either original equipment manufacturer or cell phone company). I can hardly believe it’s true, but you’re welcome to acquire your own experience. Do your homework and follow the instructions to the letter, as missing the steps that might look small or insignificant may result in bricked phone or a failed flash.

There’s not much to the process of flashing of a new radio except for following the instructions. Make note which exact version did you test and what were the results. Pick a few spots where you know for sure the reception was good, decent and bad and test there thoroughly. Number of bars, no matter how heavily promoted by AT&T’s commercials, doesn’t mean anything – make calls longer then 3 minutes, note the call quality during the call. Take note on a battery drain as different versions of radio may consume power differently and the last version does not necesserily means the best. Remember, that you are testing same hardware in the same locations and the only thing different is your phone radio’s software. Pick the one that works best for you and move on.