Comparison – You’re Doing It Wrong: Comparing Apple’s iPad to Other Devices On The Market

There have been lots and lots of posts about how newly introduced Apple iPad compares to other similar devices that are either currently on the market or very close to be there. Somehow almost everyone fails to understand while comparing all these devices – and what they will inevitably realize while actually using them – is that size does matter. Size of the screen that is. There is a certain threshold in a screen size. Go below – you’ve got a pocket computer, hopefully with a working phone. Go above that and you’ve got a laptop in its raw form – something that fits on your lap. Either would serve different purposes, either may – or may not – serve as a partial replacement for another.

This threshold is somewhere around 7″ to 8″ screen. Most of the stuff below that would fit into pocket almost anything above that would not. Maybe the only orphan here would be Sony Vaio P-series with it’s ultra-useless-wide 8″ screen. It is as elegant as it is useless.

Comparing Nokia’s smartphone to Archos’ media player to Apple’s iPad computer is wrong. You are comparing apples to oranges to kiwis. While they all fruit you can’t really say which one is better. All depends on purpose and the purpose is different all across the board. Nokia N900 is a good smart phone. Archos 7 is an excellent multimedia device. Sony Vaio P series is a perfect thing to keep your pocket fully stuffed. iPad is none of those – it’s not a phone, it doesn’t fit into one’s pocket and it so much more than a multimedia player that Apple even pushed iWork demo for it – just to prove their point. I don’t think anyone would prefer using iPad for office tasks over regular PC or laptop, but the idea that iPad is more than sophisticated movie player/e-book reader should have been pushed through nonetheless.

So what should we compare iPad to? Unfortunately for consumers there are not that many devices you may compare this to. There are a few laptops with touch screens by Toshiba and Lenovo, there’s Asus Eee PC T91 with touch screen

. They all way heavier than iPad. They all are pretty poor on batter life. Although we haven’t seen iPad yet, but something tells me Apple will get past 7-hour mark (another threshold!). They all have resistive technology screens whereas iPad sports capacitive, which is more convenient for general everyday use. iPad has got a slower CPU, but it’s irrelevant given the tasks you would be doing on such device. Remember how you chatted or browsed the internet or used Facebook just the same three years ago? Lack of Flash would actually protect the end-user from negative performance hits, everything else would feel just the same.

Two or three months is not a significant time frame for any competition to emerge with anything close to iPad. Yes, Microsoft and HP had partnered to introduce their tablet PC two weeks earlier, but what is that device, really? There are no specs, no real pictures (except those from CES), no dates. Sorry, folks, but if you want a tablet – you stuck with iPad. For now.

As I have shown in the previous post (Tradeoffs Small Businesses Make Are Wrong) picking up “cheap”, “good” and then “fast” is wrong? I promised to elaborate on a better answer, so here goes.

If you have any kind significant small business experience – you probably already suspected that there is no right answer. At least there is no silver bullet. What you want to do is project a right image and get the best for your business. You wouldn’t buy a hot dog from a street vendor for any price if you don’t eat hot dogs or if you are not happy with cleanliness of the spot. In other words – you always go for quality first and you are willing the price if this price is justified. When you go to a fancy restaurant – you’re not questioning the portions, even though they are noticeably smaller than any of all-you-can-eat offerings. Why? Because of the quality!

If you are not doing the same for your business, you should. Or you should quit. Quality is, in most cases, the best competitive advantage you can come up with. Features will be duplicated. Prices will be brought down. But beating quality is a long and complicated road, so if you can offer a higher quality product from the start – you should. It works the other way too – you should ask for the highest quality you can buy for your money.

That means you should start buying before you even look at the first price offering. Think of how important the product or the service is for your business, what the impact, the benefit or justification would be to having this product or service. For example, if you want a new web site for your new product – think how big is the market you want to engage and if whole new web site along with it’s promotion is worth the return you will get.

Once you are done assessing the desired outcome, you should start shopping around. This way when you are in negotiations with service provider or sales person – you know exactly what you want and how much you are willing to spend. A lot of companies are willing to give you the most bang for your buck – as long as you know what bang you want. In many cases that is what we offer our clients – give us your budget and we will give you the best we can that those money can buy. So far this approach for clients worked better than anyone else. This way we know how much we are paid and client knows what to expect for that amount – and is happy with it.

To wrap it up – the so-called “right” answer to the problem of choice is to get the best quality for the money you are willing to spend. Each time you have that urge to say “I want the cheapest thing possible” always think that some people throw food into garbage and that food is the cheapest you can find. Would you eat  it? I’m sure you won’t. 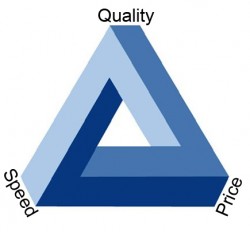 The trade-offs that small businesses are making are wrong. Well, most of them are. Look at the picture on the left and it will get obvious that you can’t just tweak one of the parameters without compromising other two.

Here’s where it gets tricky. Sometimes, during negotiations, when clients ask me how much would something cost I say I can do cheap, good, fast – pick any two. What should come to no surprise to anyone is that clients almost always pick “cheap” first. Then they add “good”. Then, after some thinking, they say “and I don’t want it to drag into next year”. It’ not just that this is “crisis” and people are short on cash. It’s the way of thinking of small business owner. Guess what’s wrong with this picture?

You think nothing? Alright, read on.

First of all – once any business you’re dealing with (and we are talking about B2B here) hears you pick “cheap” first – they think you are cheap and rightly so. What you probably missing is the departure of their train of though. If you are cheap – they better off try their chances somewhere else where they can make more money. Oops. You just lost a valuable partner, future investor or a bunch of referrals.

Second – when they hear you pick “good” as a second, they immediately project this on your product or service. If “good” comes second for you when you are getting something for your business, it means you are not making goods or services good in the first place, you are making them cheap. And if they turn out to be good – it’s an added benefit. Oops again – you just did more damage to your image or brand than all your competition together.

Third – when they hear your projected time line is “sometime before next year” – they get a really good understanding of your take on schedules and deadlines. That is – if they are still listening at this point.

You can see that a natural response from most small business owners is damaging their reputation – in both short and long term. Even though there is no right answer to this question (strictly speaking), any business owner who want their business to grow should know how to answer that. How? Next post would elaborate on that.