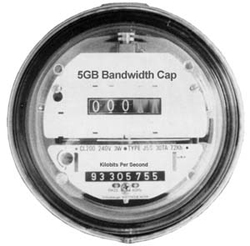 With the latest craze about Time Warner and AT&T introducing download caps for their subscribers, it doesn’t seem like companies care for anything but the short term profit, if that. Price-conscious consumers won’t buy into this game again, like we did with cell phones and limited minutes. Anyone who ever overused their cell phone plan knows how hard it was to pay off skyrocketed bill. Personally I had that experience only once – I was consulting some really large project over the phone and my phone bill went from regular $120/month to $653. Of course, it was a justified business expense, but still – it would have been just $240 if I had two separate plans. If you ask me today – I would go to any lengths available to keep my costs down these days. But I digress.

What beats me in the whole capped broadband picture is that ISPs are trying to implement a restaurant pricing. While at the same time forgetting that they are anything but. My cable provider claims that he provides speeds up to 15Mbps. My dedicated servers are on 10Mbps lines burstable to 100Mbps and I am yet to see speeds above 1 megabit. Between themselves servers swap stuff at very least at full 10Mbps which makes it painfully obvious that my cable provider lies is something like McDonalds – at best.

What is obvious to me is that download cap pricing structure is a loose-loose situation for everyone. Once consumers will get a feeling of what their limit will give them, most of those who, supposedly, would be a cash cow for ISP will leave for something else. Or keep their usage under strict control. Either way, ISPs will loose money. Or, rather, will earn less than they do now – just because they have caps. Wouldn’t you talk on your phone more if it was unlimited calls? Sure. Are you postponing calls to your friends until it’s “unlimited nights and weekends”? Most likely – yes. See the pattern?

If provider companies are so inclined to slice their services in tiers – why not turn the situation into a win-win? How could they do it? TIER THE SPEEDS, NOT THE DOWNLOADS. Some “old parents” setting wouldn’t need more than occasional e-mail checking, downloading pictures of their grandchildren and maybe a video or two. That would be a slowest and cheapest tier. A mom-pop-kids shop would probably need some more advanced tier – videos, music, iTunes for kids, heavy MySpace/Facebook and YouTube. And geeks, gamers and internet business owners would appreciate the fastest speeds and the lowest pings out there at the premium. Basically, companies would milk the same bunch of people, only do it so much different that it would make everyone happy.