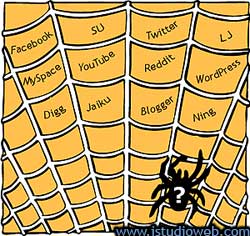 While everybody is watching Olympics in China, there are couple of wars going on. There’s a war in Georgia where russian tanks and bombers are leveling off residential buildings. This blog, however, is not about the politics, so I will talk about another war, the information war. While most of what I will be writing below pertains russian-language blogs, I am sure most other communities have similar trends.

When checking a reaction to any event in popular blogs it is always interesting to separate comments into different categories. There are people who agree or disagree to the author’s point of view, there are people who just dropping their 2 cents and there are people who just want to “chime in”, so that their user name and web site show up. In blog communities, namely LiveJournal, that’s very popular among Russian-speaking crowd, things go a little different, especially for a political event. Once something major breaks in – and by major I understand something attracting hundreds and hundreds of comments – a very special kinds of trolls crawl from under the bridges. Some of them are, indeed, creatures of their own low self-esteem. Others, however, appear to be on government’s payroll. Given the ultra-patriotism that Russian government under Putin was imposing it was both amazing and scary to watch the proliferation of “paid ultra-patriotic trolls” (PUPTs, which sounds close enough to “puppets”) throughout the Russian-speaking web.

These creatures don’t allow anyone to bash or even question the righteousness of Russian government, anyone who does it is being bashed, accused of being pro-American, jewish, stupid or just one who “doesn’t love his country” (everything mentioned is considered to be very bad by common folk in Russia). Given that most of UPTs are being paid for what other people do at their leisure time, the strength of trolls’ attacks supercedes any and all counter-measures one can take. Obviously, when some on-the-fence bystander watches the crowd bashing a single unknown user he is happy to join in and support the crowd or at least is being smart enough not to oppose the crowd. The fact that the “crowd” may consist of a very few government paid employees using multiple online identities sort of escapes the moment.

For a person, who is not constantly bombarded with propaganda news from Russian TV, radio and newspapers it is easy enough to tell the PUPT from regular troll from someone who was just sucked into discussion. Paid UPTs are usually either very aggressive or very thorough. Pretty much everything – from language patterns, to responses to other non-paid UPTs and to other members of discussion – can give them away. It’s somewhat hard to tell the UPT in a separate blog, but in a community similar to LiveJournal it’s quite easy. PUPT’s own journal (blog) is either empty, filled with crossposts from another blogs (usually automatic) or reposts from news sites. Very rarely one can find a regular personal blog that belongs to UPT, usually this indicates the main account for “troll master” or, if I can put it this way, the puppeteer. His role is usually to oversee the big picture and engage large targets. This figure usually less aggressive, poses as some authoritative resource, citing documents, providing links (mostly to other propaganda sources or selected specifically to represent certain propagandistic point of view) and so on. Beating one usually requires a lot of knowledge, ability to support own point of view with quickly found links, materials and evidence as well as at least partial support of community.

Technically speaking, there’s nothing new in these techniques of political trolling. Sure thing they date back as long as politics themselves. With proliferation of the internet, even though crowds are twisted more towards the entertainment, governments eventually realize the full power of online communities. Given the resources available to (any) government it is very easy to predict what will happen next. Of course some communities will survive the PUPTs infiltration. Even omniscient and omnipotent KGB did not twart dissidents of Soviet Union – mostly because they were harmless, but also because it very hard to chase down every single person who allows himself to think differently. However, as to Russian-speaking resources, it won’t be long before any reasonable discussion will be shut down one way or another due to the presense of vast army of PUPTs. Russia has only one prime channel that is controlled by the government (all major channels are, but 1st Channel is broadcast all over Russia), most of translations of foreign newspapers available from single web site that provides propaganda-tweaked translations of news (I personally saw a few articles from NYTimes translated in such a way that the whole meaning of the article was reversed) and most newspapers are lean to publishing articles about celebrities and aliens. It’s much like the Chine’s Great Firewall, only much more subtle and powerful.