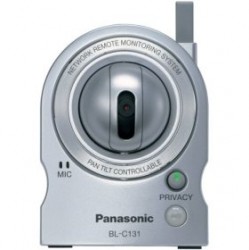 Couple of months after moving into new apartment I realized I need a better view of the inside when I’m at work. Maybe I am a little paranoid, but it never hurts to watch your house when you’re not there. So after some research I got a single Panasonic wireless camera (Panasonic BL-C131A Network Camera Wireless 802.11

if you want it from Amazon).

Camera easily hooked up to my existing wireless connection with WEP, successfully restarted into wireless mode in another room and was overall fun to use. Especially when I told my girlfriend I was going to watch her working in my office because she wasn’t familiar with my model of printer. Aside from this being total fun and all, the camera provided to be a really valuable tool in remote management and teaching. I could see all the controls pretty clear and could pinpoint controls that needed attention. Accessing a single camera from the web was not an issue as well. I opened single port on my router and that was about all I needed to do.

After having all this enjoyment I went back to Amazon. They had the lowest price on this equipment at the moment – and I think they still do. Next stop – I purchased one more of BL-C131A Wireless camera, one Panasonic BL-C111A Network Camera Wired

. The reason for latter was that I wanted to tie all cameras into the single router that was wired into my brand new Linksys 802.11n router with WPA.

After meticulous updating all three units firmware, connecting and setting up cameras with the Panasonic router there were still some kinks to work out. The preferred way of connecting camera router to base router is via UPnP. The problem is that the Linksys router doesn’t tell you which IP address is being used by UPnP device.