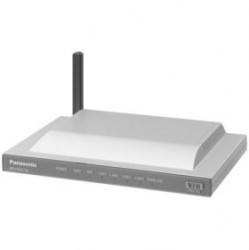 The good thing about Linksys router is that it still shows all the reserved IPs, even without the actual name of the device. So with only two unnamed devices (somehow iPhone didn’t get a name on the connected devices list) it was pretty easy to figure out what is what. Overall process of setting up three cameras for camera portal was pretty easy, but I stumbled on getting to view cameras from Internet. The default setting that is being picked up by the camera is that of the network you are setting the whole system up. Which basically means – your local network. So whenever I was trying to access the camera from outside I was still being thrown to 192.168.1.something address.

With some additional tweaking (your settings could be different, so I am not posting mine here) I was able to get everything to work together. Because of firewall restrictions at work I was not able to utilize Camera Portal to its full extent. Instead, I keep accessing all three cameras individually, at the same address with different port numbers. Initially, the ActiveX component wasn’t favoring Internet Explorer 7 (no problems with IE 6 though, strange), but it seem to be working alright lately. For Firefox/Opera browsers the Java applet used instead. I had mixed results with it as it could work and fail on a same computer at different times.

So the whole set up is now consists of:

Cameras transmit video in up to 640×480 resolution, but 320×240 is preferred. Camera’s also have built-in microphone, so mind the bandwidth if you go with higher quality settings for both video and audio. The quality is on par with or a little below regular cell phone camera, but you didn’t expect to make movies with these cameras, didn’t you?

– I got the cheapest they had. Just make sure the camera stands firmly on it. Third camera doesn’t have any stand and just sits on the shelf. Thanks to the large dip in the back, wires don’t get in a way.

Overall I am very happy with my system. There are some glitches, though. Sometimes the video just freezes completely, although sound is coming though. Panning or zoom don’t work altogether, so you have to reload the page to get video right.

Panasonic also has a recording software that works with their cameras, but since I didn’t really need it yet – I can’t justify the cost of buying it.