Just when I was about to write how our local UPS office picked up the ball after main office dropped it – they blew it above the sky. Hour later I got a call from our local UPS office and nice lady promised that driver would contact me about an hour before dropping off my package AND drop-off will happen after five. Well, I said, thank you, this really saves me a lot of trouble.

I got home something before six o’clock and find a third UPS InfoNotice flying on the floor. Which means that driver didn’t call me, at least I haven’t seen any missed calls on my phone. Tough luck, I said, and drove my 30 minutes to UPS pickup location. Today was a lights-on day, since the garbage truck garage across from UPS yard was lit to its fullest. Nice teamwork! Got inside at around 9:30pm – and the line was worse than those at the airport on Thanksgiving. In just under 30 minutes I got to the clerk who grabbed my InfoNotice and went after my package. In about two minutes he emerged back only to tell me that… they lost my package. “It’s somewhere in the building, we just can’t find it”. Nice. The guy seemed upset that I came over for the missing package and I kind of agreed that I was better off picking up the package that wasn’t missing. But this is life and my package that UPS was trying to deliver three times got lost. Guess it got upset too.

Now to the brighter part. Few hours after I’ve published the previous post I got a comment from UPS’s PR lady. I held off the comment until I came back from pickup to at least say that the problem got resolved. Well it’s not and it’s not actually my problem. Here’s why.

UPS is best if you order something to the location where you are present during business hours. These guys probably great for serving businesses and all, but regular folks who work day jobs and hope they can get their stuff after hours get sidestepped. I’d rather take my wife to a movie or take her out on a Friday night than spend hour and half picking up stuff that was supposed to be delivered three days ago. So, here my words to Debbie, who wrote “you’ve really had a hassle with this shipment“. Debbie, I hadn’t had a hassle. It’s the way UPS works for all who can’t schedule a delivery to their work address. That’s the kind of service (or rather lack of it) that all those people in line at 10PM on Friday night are getting. It would be just honest to state right there on your brown web site: “We’re doing business from 9 to 5. If you want to pick up your stuff any other time – come and get it yourself, you loosers”.

Rant mode off. Debbie, this is still for you, though. The economy is tough, and if tomorrow someone’s gonna start a shitstorm on Twitter about how not to use UPS but use FedEx or USPS instead – you gonna have a problem. I don’t depend on UPS in my ways of doing business, but I have plenty of clients who do and they aren’t all that satisfied either. Here’s the moment of opportunity and innovation for UPS. Google the term “cell phone”. I’ve heard they’re good in establishing a two-way communication between two people, in your case – the driver and dispatch. You can also google “blackberry” and “gps phone”. Sending one-way messages to driver’s pager is so last century. Call those guys at Sprint, AT&T or Verizon, get a contract. I’m sure with tough times like these you will have an upper hand in negotiation a good deal. Next step – map your drivers. Know exactly where they are any time of the day. If you need someone to do it for you – hire me, I can get this done for you. Next step (here comes the trick!) – ask your customers when they want their package delivered. Seriously. For real. Don’t just game the numbers (“we deliver more packages…”), but actually deliver them. When customers want. Here’s how: you have live traffic maps (Google does it as well as other providers) plus you have exact location of each of your drivers. You can minimize their time driving by reshaping their route in real time according to traffic patterns. This means less gas burned, less time wasted, less destinations visited multiple times. With the money saved ask a quarter of your drivers to work second shift – from 2pm to 11pm. You won’t need many people because I imagine most of the deliveries would still be within 8 to 6 time frame. You already charge a bit more for residential deliveries, so here’s a way to put those extras plus whatever you saved to good use. This will unload the 8 to 6 schedule somewhat and reduce return trips. I’m sure you can have your own quality improvement department cough up the real numbers to do the math. But in addition to this all – you will get a customer satisfaction beyond any imaginable level. Which means – more business for your company. Isn’t it a win-win?

We love UPS, don’t we? Last week I ordered something for my wife and the package got shipped by UPS. Guess what? UPS excels again. After I have missed the delivery for two times because I was working at the same time UPS delivers packages (sorry, my fault), I have called UPS to either arrange the pickup or ask them to deliver the package at a more convenient time.

That’s when the fun starts. In case you live in the UPS local center you should know that annoying female voice that reads all the voice prompts. I needed the customer service rep, but she insisted on choosing either to track a package or order shipments. Once you concede – she will read you the status of the package. Hm… let’s see… I know what the status is, that’s exactly why I am calling! Let’s try to ask for customer service again. “I can connect you, but this is the latest information on your package that we have“. Right, why else would I want to talk to the operator – to find out if UPS is hiding the status of the package. Black helicopters, anyone?

The operator was slow enough not to realize what exactly am I asking of him. Once he told me the UPS will call me to notify of the time I will be able to pick up the package I asked where would I be picking it up – at home or at local UPS? I asked this question no less than six times, only to be told that (these are actual responses to my question, I omitted repetitions only):

This guys is a genius, I think he’s a next UPS’s CEO. Too bad no one cares about UPS’s customer service for individuals. 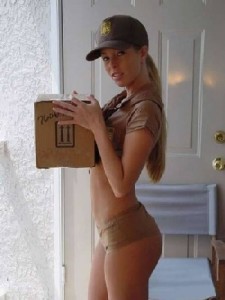 Usually I try to avoid using UPS, but when both hard drives in my laptop died on a same day and I called Lenovo for replacement – there’s little choice to be had. Last night I found a familiar brown-yellow-white note on building’s doors saying that UPS has made a second attempt to deliver the package. It’s not that I was aware of the first attempt, but who’s counting, right?

Well aware of all the issues facing me I called main UPS number and quickly found out that my package is resting peacefully at the station across the town. We’re only New York City’s most populous borough, with 2.5 million residents and the second most populated county in US, so we only get a single UPS station to pick our packages.

However, much to my surprise, the station is open from 8pm to 10:30pm (that’s right, night hours) for package pickup. Nice location (some warehouse neighborhood), friendly parking spots (half the streets around this huge UPS yard are marked “No Parking Any Time”), easy access (I only had to walk one and half block from the parking spot I found to a small entrance in a fence with no lights on) – all makes it a pleasure to visit and pick up the package.

The staff, though, is very friendly – either on the phone or on the location. I didn’t hit any lines (understandable, given the place and the time) so I got my stuff in well under 20 minutes.

Nice to see a movement in a right direction for UPS. Now if only I wouldn’t have to drive 30 minutes from home to UPS yard – it would have worked much better.